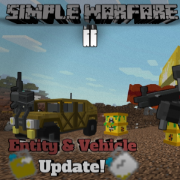 Mod: Simple Warfare II First Look is one of the most extensive military-themed mods. It adds firearms, first aid kits, ammunition, new mobs and all sorts of military equipment to the game.

For silent sorties, the tactical M5 is perfect, for medium-range shooting it’s a good idea to stock up on the classic AK-47, but for really hot shootouts, you should take a minigun. And this is only a small part of all weapons, in addition there is even an atomic bomb. Recall that with such an arsenal, you should not forget about the cartridges, it is better to craft several clips at once.

Do not think that with so many weapons you will feel safe, the mod adds new mobs.

Even a simple soldier is able to extremely accurately drive a bullet into the enemy, try to make friends with him, with the help of a gold ingot, for example. It will be more difficult with an engineer, because he attacks from afar, do not forget to look around. Well, if you meet a juggernaut, I can only wish you good luck.

Also, do not forget about military equipment.

From now on, you can ride a real Hummer. The main thing is to keep an eye on the remaining gasoline. I am already silent about the military helicopter, such machines should only be trusted by professional military personnel.

In addition, a new wasteland biome will appear in your world. Let the scorched and lifeless land not upset you, there is something to profit from in the wasteland. The truth is, you're not the only one who knows...