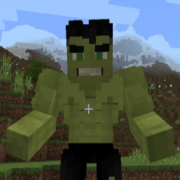 Have you dreamed of diversifying your Minecraft game for a long time? Then it is recommended to use Mod: Hulk Addon, which adds a new character to the virtual world - the superhero Hulk. As in the film known to all, he is endowed with a special power against which no one can resist.

Mod gives players a surprise: in addition to the main Hulk, he adds a few more characters. So, the Minecraft user will be accompanied by: a woman Hulk in red and green, a red Hulk, Abomination, Daredevil and many other heroes.

The author of this creation paid maximum attention to the appearance of the creatures: for example, they are as elaborate as possible and exactly repeat those that were presented in the film of the same name.

The user can turn into each of the characters described above: in order for this feature to be successful, you need to enable the experimental options that are in the map settings.

Mod: Enderwoman
Another addition from the developers of the cult toy Minecraft, which will delight a huge army of
hit
upd
new

Mod: Item Drops Holograms
The developers made sure that when hovering over an item, its name was added and created Mod: Item
hit
upd
new

Mod: Ride Players & Picking Up Mobs
Items and decorations are certainly good, but action is much more interesting. The creators of
hit
upd
new

Textures: Max's Better Mobs
The long work of creating and improving textures for the game has come to an end. Textures: Max's
hit
upd
new

Mod: Waypoints 2
Players are used to the fact that moving is the longest process in Minecraft. You can set waypoints
hit
upd
new
Comment (0)
Comment
Releases
Popular Skins