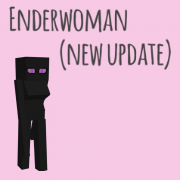 Another addition from the developers of the cult toy Minecraft, which will delight a huge army of fans - Mod: Enderwoman. This update allows you to add a new type of Endermen - Female Endermen. The new characters will look almost the same as regular Endermen, but the fact that the character is female will not go unnoticed. There are practically no changes in behavior, just a new kind of characters that reflect the female essence of the monster.

At the same time, female Endermen will not look as sinister as male mobs. Well, it’s understandable, although a monster, but still, a woman! Happy gaming everyone!

The article turns out to be shorter, because there is nothing special to describe here, I hope that this is not scary. You seem to have indicated in the TOR that this is permissible.

Mod: The Mimic: Lanterns & Demons
Many people like horror stories, maybe someone even played Mimic before. And now the Minecraft
hit
upd
new

Mod: Change Nametags
The game development team once again delights fans with new features: now, if you have a desire,
hit
upd
new